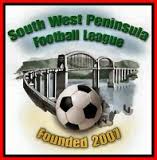 Stoke Gabriel ended the year on a high with six goals and a clean sheet against the Robins of Budleigh Salterton at Broadley Lane. With Brixham and Newton Abbot Spurs fighting out a goalless draw at Wall Park, the Railwaymen extended their lead to four points at the top of Division One East.

Jordan Hopkins almost gave Stoke the perfect start, beating a number of defenders but firing wide within the first five minutes. Ryan O’Callaghan headed into the net after 12 minutes but that effort was ruled out when it transpired that the referee had already blown up for a free-kick to the visitors. It was left to Dean Stevens to open the scoring with a deflected free-kick after a challenge right on the edge of the box.

Hopkins made the scoreline more comfortable in the 54th minute with a low finish into the corner after a one-two with Gareth McEwan. In the 59th minute, McEwan himself added his name to the score sheet, taking the penalty he himself had won and sending it down the centre of the goal and into the back of the net. Even better was to come on the 64th minute when Lewis Woodmore and Morgan Harford combined to set up Ollie Critchlow who finished superbly for 4-0. Callum Shipton almost gave the Robins something to chirp about but home goalkeeper Scott Corderoy came out on top in the one-on-one, saving with his legs. Stevens for Stoke and Mike White for Budleigh both fired wide before another penalty decision went the way of the home side, Stevens fouled and taking the spot-kick, sending Alan Doble the wrong way. McEwan hit number six, Critchlow crossing after a long ball forward by Stevens, and Critchlow forced Doble into a fine tip-over as Stoke strolled to a fine three points.

Over at Wall Park, both Brixham AFC and Newton Abbot Spurs were looking to bounce back from Boxing Day defeats against Galmpton United and Teignmouth respectively. Brixham looked to have got off to the ideal start when Mark Newbould’s dipping shot caught Matt Bojar cold and looked as if it had gone in. However, the referee ruled that the ball hadn’t crossed the line to the dismay of the home faithful. Apart from a half-chance for Chris Metters, which ended up in the side netting, there were precious few moments of note until the 37th minute when the Fishermen’s goalkeeper Ryan Walton pulled down Liam Moseley as he was about to convert Liam Jones’s cross. Up stepped the returning Adam Dyson to take the penalty but Walton dived low to keep the ball out. Dyson had another good effort two minutes later but couldn’t quite put Moseley’s cross into the net.

Dave Worthington almost broke the deadlock in the 46th minute, Bojar beating the striker’s effort away and Joe Molloy set up Jake Chisholm who turned and fired wide at the other end. Scott Robinson had a golden opportunity to score for Brixham 13 minutes in, taking the ball around Bojar but fluffing his lines with the attempted finish. Sam Green’s sliced effort just after the hour mark was the last real chance for either side – certainly for the visitors as Brixham began to control the possession. With neither side finding a winner, leaders Stoke were the ultimate winners.

Teignmouth missed an opportunity to close on the title challengers with  a heavy 6-1 loss at Axminster Town. After a tight opening period, Hurford gave the Tigers the lead on 33 minutes and the hosts managed a second before the break. Clean converted a 54th minute cross for Axminster’s third with Warren and Daniels also amongst the goalscorers.

Elsewhere, Galmpton United edged the derby at Bovey Tracey 5-3, Liverton United went down 2-0 at Alphington and Totnes and Dartington lost out 3-2 at home to Torridgeside.