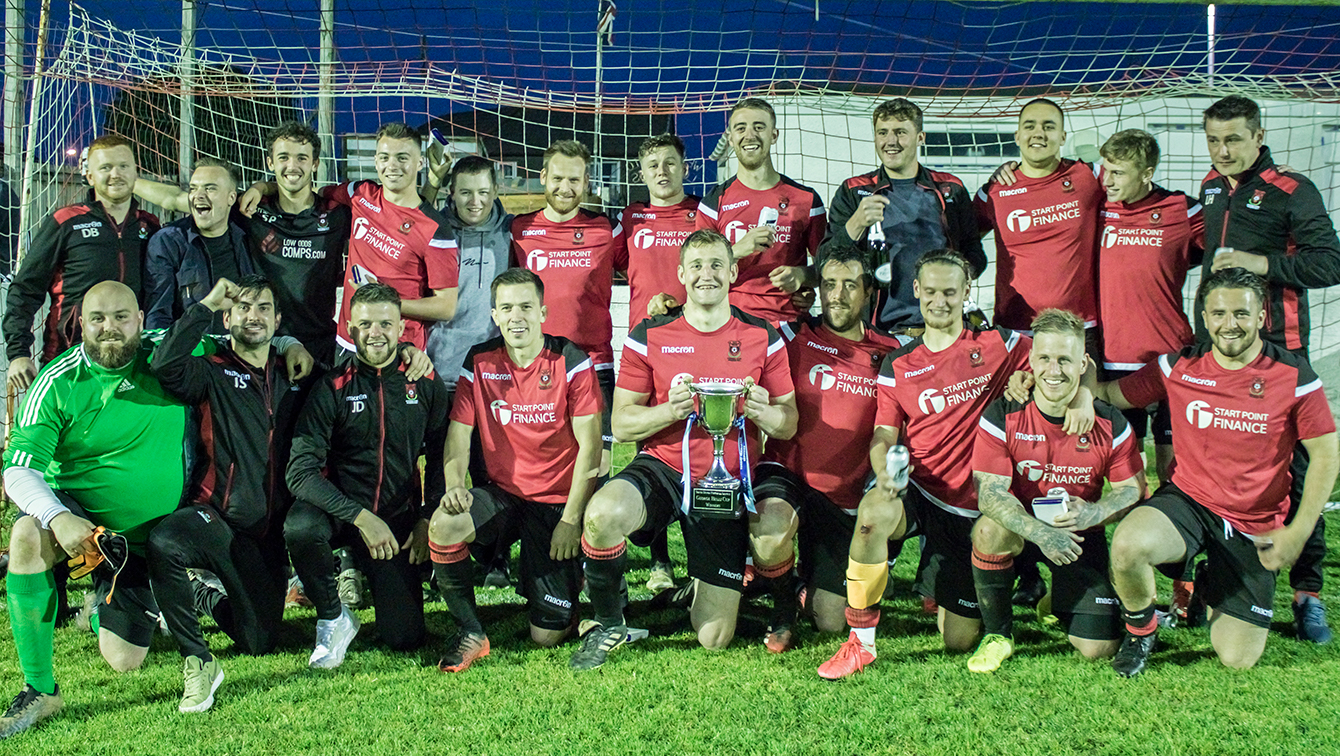 Good vision from Josef Sita set up the chance for Bullen who found space on the left before curling a shot into the top corner. That goal gave the Pirates the half time advantage, but they were rocked about an hour in when Justin Denning was shown a red card for a high challenge. Newton ’66 piled on the pressure, and fashioned some good chances, but Josh Pascoe almost made it 2-0 when his low drive was parried away. The Sixes won several corners and hit the crossbar in the dying stages, but East Allington stood firm to claim the prize.

“We’ve got a rich history in the cups,” said manager Luke Harvey. “For some reason, we always seem to find a way. Credit to the lads, because they’ve got a great spirit. Even when we went down to ten men, they didn’t stop fighting.

“It was a good, physical encounter. Both teams knew what was at stake. It was 90 minutes of hard work, and both sides were hungry for it. I thought Newton ’66 were organised, physical and strong, and they put us off our game for a little bit, but we managed to navigate our way through.”

Goalscorer Bullen was awarded the man of the match tankard by cup sponsor Manor Building Company, and Harvey agreed with the decision.

“His goal tally speaks for itself, and it has done for a couple of years now,” he said. “He’s a talisman for us. He’s still a young lad and is hungry for goals. He’s an absolute asset to the team and a great lad too. He deserves the man of the match award tonight.”

The Windmill end their league campaign with Tuesday evening’s must-win tie at Ivybridge Town Reserves. A victory at Erme Park would see Lee France’s men go into the weekend at the top of the Premier Division, hoping Saturday’s results go their way.

Brixham AFC Reserves will reclaim top spot with a win in their final game, also at Ivybridge, but Buckfastleigh Rangers, who are at home to Salcombe Town, still have the title in their hands. They will play their final game a week later, at Elburton.

Meadowbrook Athletic finished a tough season with a 7-1 drubbing at the hands of Watts Blake Bearne.

Kingsteignton Athletic are back on course for a quadruple trophy haul after they comfortably won their Dartmouth Cup semi-final replay 4-0 at Broadpark. Aaron Paget scored twice for the Rams, with Sam Barnes and Louis Dickinson also on target. Paignton Villa will hope for a better outcome on Friday night, when their reserves take on Ivybridge Town Development in the Fred Hewings Cup Final at Totnes and Dartington FC.

Kingsteignton were also in action on Wednesday night. Victory over Waldon Athletic would have ended the Clarets’ title hopes and set up an enticing title showdown with leaders Paignton Saints Reserves. The teams will play each other twice over three days.

Barton Athletic Reserves will be in a cup final after all. Their replayed Lidstone Cup semi-final ended with a 2-0 victory over East Allington United Reserves.

Division Four champions Waldon Athletic Reserves lost out for only the second time this season with a 6-4 reverse at Brixham Town Reserves. Liam Halliday and Alex McKerrell scored two apiece, with Stephen Rohan also doubling up, for ten-man Waldon.