Draw Brings Season To A Close 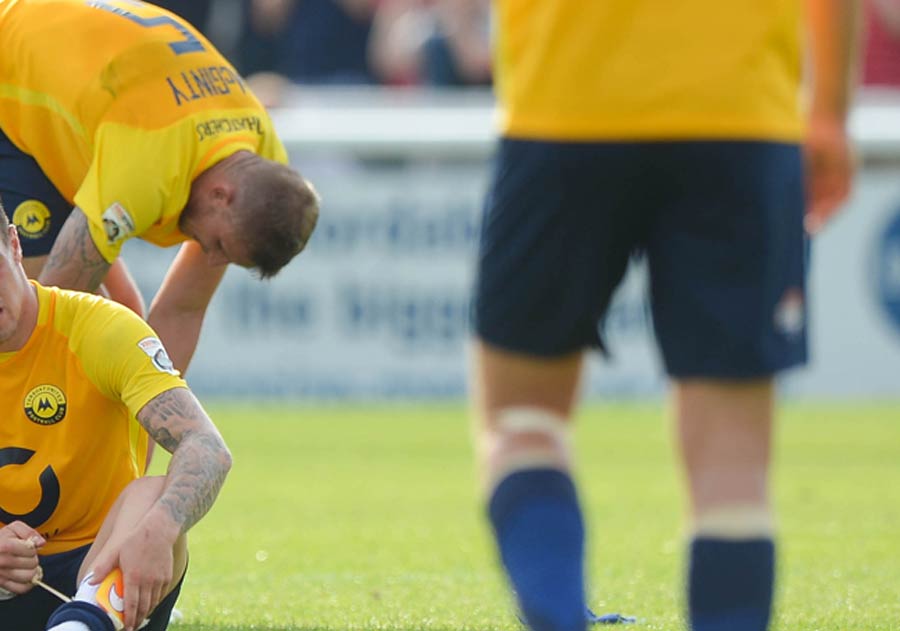 Draw Brings Season To A Close

Torquay United ended their tenure in the Vanarama National League Conferance with a 1-1 drew against confirmed playoff qualifiers Ebbsfleet United at Plainmoor on Saturday lunchtime.

On the back of a very poor performance on Tuesday night, United’s manager Gary Owers made two changes to his starting eleven and his players didn’t let him down, producing a batteling performance.

And it was Torquay who had the better of the opening quarter with first effort through Connor Lemonheigh-Evans and then Brett Williams had an attempt on goal from just outside the area. Michee Efete then beat two players on the left before hitting his shot into the side netting. A minute later Elliot Romain broke into the area from the right before seeing his effort saved by Nathan Ashmore. Ashmore was then on hand to save well with his legs from a powerful attempt by Rhys Healy after Luke Young had won the ball well in central midfield.

Ebbsfleet then started to come back into the game and had two good chances, both however were saved well by Vincent Dorel. The first at 19 minutes from Lawrie Wilson and then a 20 yard effort by Danny Kedwell a minute later.

With the first half becoming a very even affair we had to wait until four minutes before the break for the next real chance. United’s Romain controlling the ball well inside the area before twisting and ensuring Ashmore had to make another good save to deny the Gulls forward.

Neither manager made any changes at half-time and it was again the home side that had the better of the opening exchanges in the second half with Romain hitting over from a tight angle in the 47thminute. Three minutes later and a driving run from inside his own area, saw Lemonheigh-Evans find Healey on the edge of the area but the forward could only see his shot blocked for a corner.

Ebbsfleet’s Whitely then had a curling effort go over before Young produced a fantastic low cross from the right that should have seen the opening goal for the home side, but Healey did not fully anticipate the ball reaching him and the chance had gone.

The game then really started to open up with some strong challenges going in from both sides and a number of chances started to miterilise. First Lemonheigh-Evans went close for the Gulls direct from a free-kick from all of 25 yards in the 59thminute. Coulson then made Dorel, in the Torquay goal, produce a fine low save to his right from close range.

The ever lively Romain should have scored when his header from 6 yards, after a good flick from McGinty at the near post, found Ashmore in the centre of the visitors goal, when either side of the keeper would have found the back of the net.

The deadlock was then broken when Ebbsfleet’s substitute Jack Connors, who had only been on the pitch three minutes, saw his deep cross from the left in the 70thminute, find it’s way into Dorel’s net after going in off the far post, a bit of luck that summed up the season for the Gulls.

Torquay didn’t let this deter them and they were straight back up the other end a minute later. Williams was caught inside the area from the outstretched leg of Clarke and the referee awarding United’s second spot kick in successive home games. This time the penalty was converted by Healey scoring low into the keepers left hand corner.

Both sides pressed in the final quarter for a winner but neither side could find the final pass to unlock each others defences and the final whistle brought an end to a very disappointing and frustrating season for Torquay United and all their supporters.

Before todays game, the player of the year awards where presented, Luke Young again taking the main prize for his performances throughout the season.

United manager Owers must now start his planning for the new campaign in the National Conference South Division which will kick off in August. The news of retained list was due to be reviled to the squad shortly after the final whistle and we will bring this to you as soon as we have news from the club.