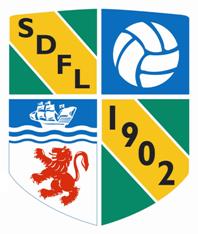 The last two places in the George Belli Cup semi-finals were decided last Saturday, with holders Waldon Athletic (who overcame Buckland Athletic 1-0 in the Herald Cup final yesterday – report and pics to come soon!) overcoming rivals Watcombe Wanderers 2-1 at the King George V to keep them on track for a cup double, Sean Finch with Watcombe’s consolation. Buckland Athletic Reserves and Brixham AFC Reserves battled it out at Wall Park but neither side could find a goal until after the break, when Bucks goalkeeper Jamie Bradley was adjudged to have carried the ball over the line after he had caught Anthony Matthews’ shot. Jamie Micklewright soon levelled things, direct from a free kick and the scores stayed at one apiece to send the match into a very controversial period of extra-time. Sam Peardon headed Buckland ahead in the first half but a superb diving header from Mark Griffiths after the interval was disallowed for a marginal offside. Then Micklewright went over in the box and was awarded a penalty with many present claiming the striker had taken a blatant dive. Whatever the truth of the matter, Micklewright scored from the spot to put the match out of Brixham’s reach. Buckland will play Upton in the semi-finals with Waldon facing Dartmouth.

Premier holders Buckland Athletic Reserves picked up a tenth win towards reclaiming their title with another close fought affair against Upton Athletic, a 3-2 win in a Thursday evening clash at Homers Heath, Charlie Johansen scoring twice in the second half to add to Jamie Micklewright’s first-half opener which had given Yellows the half-time advantage. It was Upton’s first league game of the year but they bounced back to take all three points by beating Ivybridge Town Reserves 2-1 last Saturday. Dartmouth AFC passed up the chance to close the gap on leaders Watcombe Wanderers as they could only draw 0-0 at much improved Kingskerswell & Chelston. East Allington United scored through Andy Davis, Fred Massey and Chris Jebb to earn a point away at Stoke Gabriel, their first in three matches. Kingsteignton Athletic are now unbeaten in three; the Rams moved into the top six with a 2-1 home win over Loddiswell Athletic who are now six points adrift.

The big news affecting Division One has been the sad withdrawal of Division Two champions and long-established Paignton side Foxhole United from the league.
On the pitch, defending Division One champions Buckland Athletic Thirds moved back to the top of the table with a Tuesday night 3-0 win over Bovey Tracey Reserves. Ryan Tovagliari netted twice with Chris Newnham also finding the net. Bovey bounced back with a home win against Beesands Rovers on the Saturday, Lee Morgan’s goal for the Bees outnumbered by two from the hosts. Newton Abbot ’66 had lost 5-2 at home to Chudleigh Athletic back in December but settled that score yesterday by winning by the same score-line at the Chudleigh Sports Centre. This left the door open for Ipplepen Athletic to climb into second spot, which they did with a fine 5-0 home triumph over Babbacombe Corinthians. Damien Frances Furnivall sank another four for Ashburton who defeated Buckland & Milber 5-1 for their sixth win on the bounce, Dan Steer with the visitors’ consolation. Horn, Brynnink and Griffiths hit the target for Stoke Gabriel Thirds away at bottom side Kingskerswell & Chelston Reserves to lift the Railwaymen into the top six.

Roselands have enjoyed a perfect first half to their league campaign and game number 14 also brought them three points as South Brent failed to raise a side. Buckfastleigh Rangers won 3-1 at Bishopsteignton United to hold on to second spot as third placed Watcombe Wanderers Reserves took full advantage of a Waldon Athletic Reserves side with only nine players available to boost their goal difference. Sam Edney and Liam Northcott scored four apiece, Royston Carrington hit a brace and Cieran Bridger, Sonwabile Mlenze and Lewis Bleir struck singles in a 13-1 win for the Greens. Harbertonford have now racked up three wins in a row, Jordan Ewings double not enough to stop Ford beating Newton United 4-2 at the Hams. Brixham Town scored four without reply at Abbotskerswell to condemn Abbots to their tenth straight league defeat. Draw specialists Paignton Saints produced a brilliant fight back to earn a point after it looked like visitors Kingsteignton Athletic Reserves would take all three. Things started well for Saints after some good work by Shaun Cotton whose cross was headed home by Mike Howes. After that goal the hosts suffered a lapse, sloppy play allowing the Rams to draw level through an own goal from Cotton and then to take the lead direct from a corner. The second half brought more trouble for Saints as a tame shot went straight through the home ‘keeper for 3-1. Looking dead, with ten minutes left, Cotton once again provided the assist, setting up Luke Johnson who headed home to reduce the arrears. To complete the comeback, Howes put Luke Pocknell through, the latter lobbing the goalkeeper to earn Saints a share of the spoils.

In Division Three, leaders Salcombe Town achieved a massive result with Ashley Yeoman putting away a hat-trick in a 6-3 victory over highly fancied Liverton United Reserves; Nick Bonnet, Adam Sherring and Lee Merchant also found the net at The Berry. AFC Staverton defeated nine-man Waldon Athletic Thirds by two goals. East Allington United Reserves are unbeaten in March but were held 3-3 at home by a Chudleigh Athletic Reserves side who had lost their previous two. Teign Village added to their first win since October last week with their first league win since October, following up cup victory with a 2-1 success at bottom side Dittisham United.

Dartmouth AFC Reserves swept Ipplepen Athletic Reserves aside to join Liverton United Reserves, Teign Village and Upton Athletic Reserves in the last four of the Ronald Cup. Kevin Causley scored twice for Darts, once from open play and once from the spot, just as he did last week. There was also a brace for Ian Armitage and singles from Rhys Morrallee, Cameron Webb, Richard Yeo and Nick Rushe.

It’s now eight league wins on the trot for Division Four leaders Roselands Reserves who smashed Kingsbridge & Kellaton United 6-1. But Ashby-Pearce, Collins and Thomas scored the goals that keep Barton Athletic hot in pursuit with a 3-0 win over fading Meadowbrook Athletic. Chesh Solecki’s side extended their lead over third-placed Broadmeadow to four points after the latter went down 4-0 at Riviera United. Watcombe Wanderers Thirds exacted revenge for their cup defeat by beating Newton Rovers 3-0 away courtesy of Sam Pyne, Adam Townsend and Ricky Bergin. Torquay Town enjoyed their first league win since November as they secured a 2-0 victory at home to Paignton Villa Reserves. Ilsington Villa, the last team to taste victory, finally did so in a must-win encounter at home to fellow strugglers Babbacombe Corinthians Reserves.

In the Division Five title race, the top three all picked up maximum points. Leaders Moretonhampstead just about managed to claim all the points away at bottom side Malborough United, winning 3-2. Second placed Broadhempston United Reserves scored the only goal at Stoke Fleming & Strete while Riviera United Reserves, currently third, won 3-1 away at Newton United Reserves, Guttridge’s contribution not enough this week.
Form side Buckland & Milber Reserves picked up their ninth successive league win by edging Chudleigh Athletic Thirds 2-1, Danny Harry and Matt Winsor with the goals. Sean Paul Hooton’s strike won Paignton Saints Reserves the points at home to Newton Rovers Reserves; Saints move up to sixth after their second win in two weeks after a hard fought game in which both defences played a key role. But with around 20 minutes remaining, good work by Ian Simons set up Hooton who made the most of his chance.