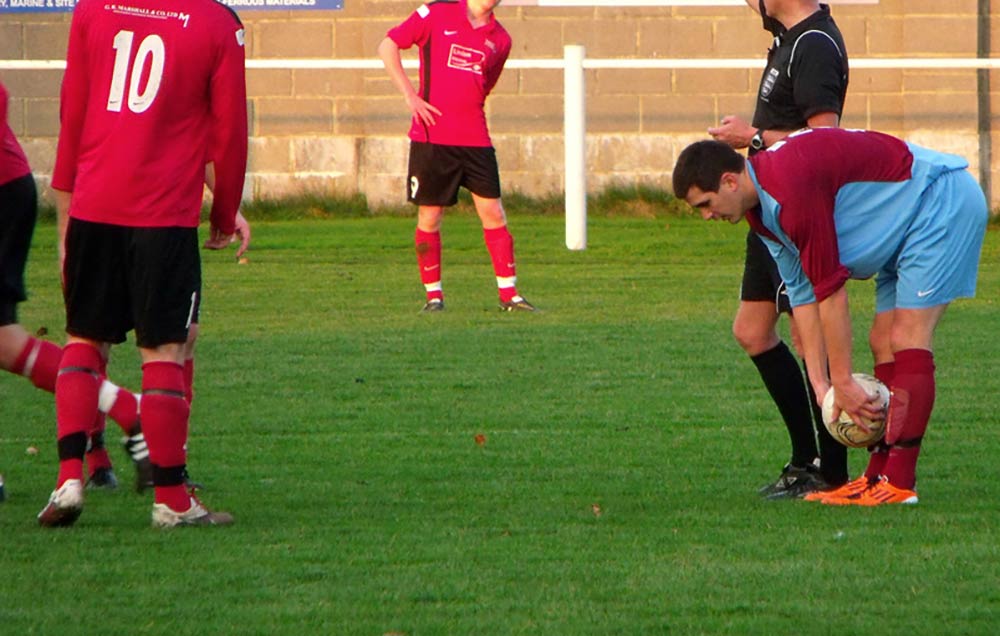 Herald Cup holders East Allington United crashed out at the first hurdle this season as they became the latest side to fall at the feet of an in-form Buckland Athletic Reserves side. Simon Revell opened the scoring with a curled shot from range. The lead didn’t last long though as Simon Hannaford restored parity minutes later. The game looked to be heading to extra-time when Bucks struck twice in the dying minutes to book their passage. Revell was again on target with a goal of the season contender with substitute Kingsley Burrows also finding the net.

Defending Premier champions Ashburton also bowed out in Round One with Paignton Villa the unexpected victors at Chuley Road, 3-2 the final score.

Premier new boys Chudleigh Athletic faced a potential banana skin at Broadmeadow STFC but the visitors were in no mood for an upset and enjoyed a 4-1 win. Nik Garrett added another goal to his tally and was joined on the score sheet by by Ryan Sanders, Joseph Wise and substitute Mathew Carroll. Andrew Espley scored for Broads. The only other Premier team in cup action were another newly  promoted side Totnes and Dartington. Tots hosted Division One side Torbay Police and made it through to the second round 2-1 courtesy of two goals from their talismanic goalscorer Daniel Block, Chris Burgin scoring from the bench for the Bees’ consolation.

Paignton Saints also cruised through 8-0 in their away trip to Malborough Playing Fields where they faced fellow second tier outfit Salcombe Town. Saints started on the front foot and created chances right from the off. Matt Reed took full advantage of his first start of the season by opening the scoring before Jamie Micklewright fired in his eighth goal in four games to make it 2-0. Man of the match Javan Wright then struck before the break to give the visitors a commanding lead. With Salcombe having to chase the game in the second half, Saints’ excellent back line held firm before Javan Wright effectively put the game beyond doubt with his second. But Saints were in no mood to take their foot off the gas and further goals from Joe Jordan and Jamie Ford (2), both also making their first appearances of the season, and Kurtley Hassall put the gloss on an emphatic win.

Things were a lot closer at Bovey Tracey in an eventful game against Hookhills United which saw six goals, a missed penalty and four red cards! Home goalkeeper Mark Perring was the first to get his marching orders after handling outside the box but the ten men, as so often happens, took the initiative to go two up through a Steve Cooney bullet header and a low shot into the corner from Charlie Nichols. But two goals from Hookhills’ James Munro pulled the Division Three side right back into it. Michael Tapper had the chance to deny Hookhills extra-time with a late penalty but the visiting goalkeeper saved. He could do nothing about Cory Brennan’s penalty in extra-time though and Brennan added a second to complete a 4-2 win for Bovey. By the end of the game, Bovey’s Christian Fleet and Hookhills’ Marc Graham and Stephen Broome had also been dismissed. Ipplepen Athletic also required extra-time to knock out Abbotskerswell 3-1 at Abbots Park.

There were also three Premier games. Bradley Frost struck twice for Darts in a 5-3 home win over Kingskerswell and Chelston; Connor Finch scored a hat-trick to help Watcombe Wanderers to a 6-4 home win over Brixham AFC Reserves and Kingsteignton Athletic put five past Roselands without reply. Ross Beer, Connor Crocombe, Ollie Kewell, Tom Reeves and Joe Clark-Farley all scored for the Rams.