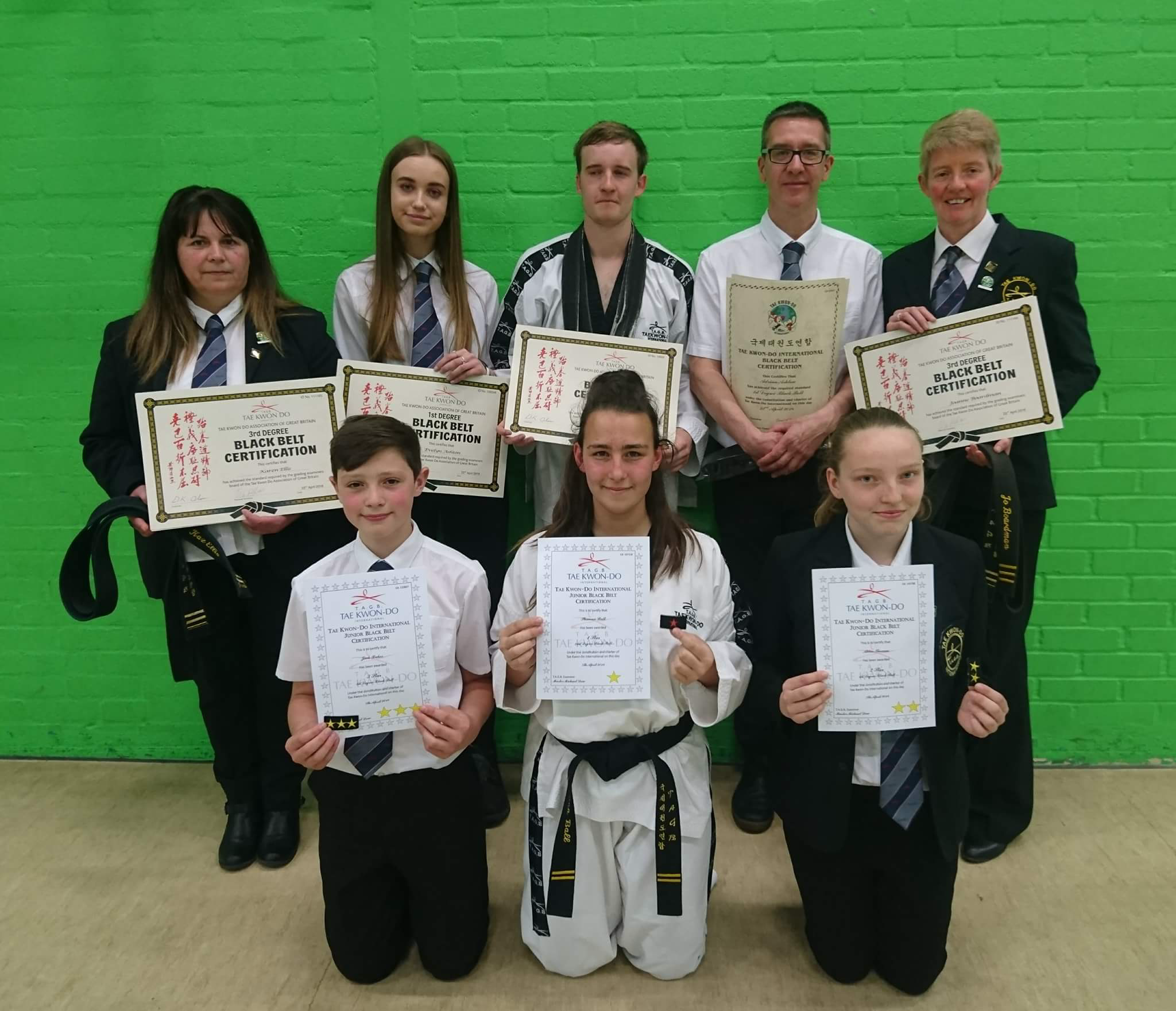 The weekend of the 19th and 20th May was a busy one for students from MartialArts4Fun School of Excellence (based in Teignbridge).

It started on Saturday morning with a stripe assessment for the juniors, where they were able to demonstrate to the panel of Instructors what they had learnt over the past 3 months and that they were ready to move onto the next stage of their Tae Kwon Do journey.  Well done to all of those who passed but a special mention to Evan, Kayden, Hannah, Samuel and Junior who were awarded plus passes.

In the afternoon the focus switched to the coloured belt grading examination.  The exam is overseen by the Vice Chairman of the Tae Kwon Do Association of Great Britain (T.A.G.B.), Grand Master Michael Dew 9th Dan.  Students are tested on their technique and understanding of Tae Kwon Do including Korean phrases.

There was a 100% pass rate and the following students gained the coveted grading award for their school along with an A-Pass: Scott Franks (Newton Abbot), Charlotte Davies (Ashburton), Tilly Einzig-Pilling (Bovey Tracey) and Lance Keay (Teignmouth).

Narrowly missing out on a grading award but taking away an A-Pass in his first grading with the T.A.G.B. was John Dunlop (Ashburton).

A special mention needs to also go to 3 people who gained a plus pass: Andrew and Hannah Lloyd (both of Newton Abbot) and Albert Course (Moretonhampstead).

The grading examiner Mr Dew was also presented with a card congratulating him on his promotion to 9th Dan Grand Master.  He has been teaching Tae Kwon Do in England for around 50 years and has been the Vice Chairman of the TAGB for the last 35 years.

The weekend continued with a trip to the National Indoor Arena in Cardiff where a contingent of 14 competitors accompanied by 3 officials attended the Welsh Championships. The Championships saw over 1,000 competitors from T.A.G.B. schools across the country compete in various elements of Tae Kwon Do.  There were also over 300 volunteers helping to officiate at the event, ranging from Umpires and Referees to Welfare Officers and Medics.  The day saw some excellent technical patterns and hard fought sparring bouts which the spectators were able to enjoy from the purpose built seating area.

There were successes for 9 of the MartialArts4Fun students; Tasha Harding and Shaun Hall competed in their respective 1st Dan patterns category and both took home gold.

The final events of the day were the strikemate where competitors of all belts compete against each other to see who can generate the most power from their chosen technique.  In this event the categories are split according to the competitor’s weight so adults and juniors can compete against each other; 14 year old Shawna Ball won a gold in both female middleweight hand and foot power beating higher graded adults; Karen Ball won a silver in female heavyweight hand power; Rob Burley won a bronze in men’s middleweight foot power.

All competitors are now back training hard for the next competition, the XI Tae Kwon Do International World Championships in Birmingham, in July.

The School, where training takes place locally 6 days a week across Teignbridge, welcomes new beginners and those returning to training after a break. It offers a months’ free training.