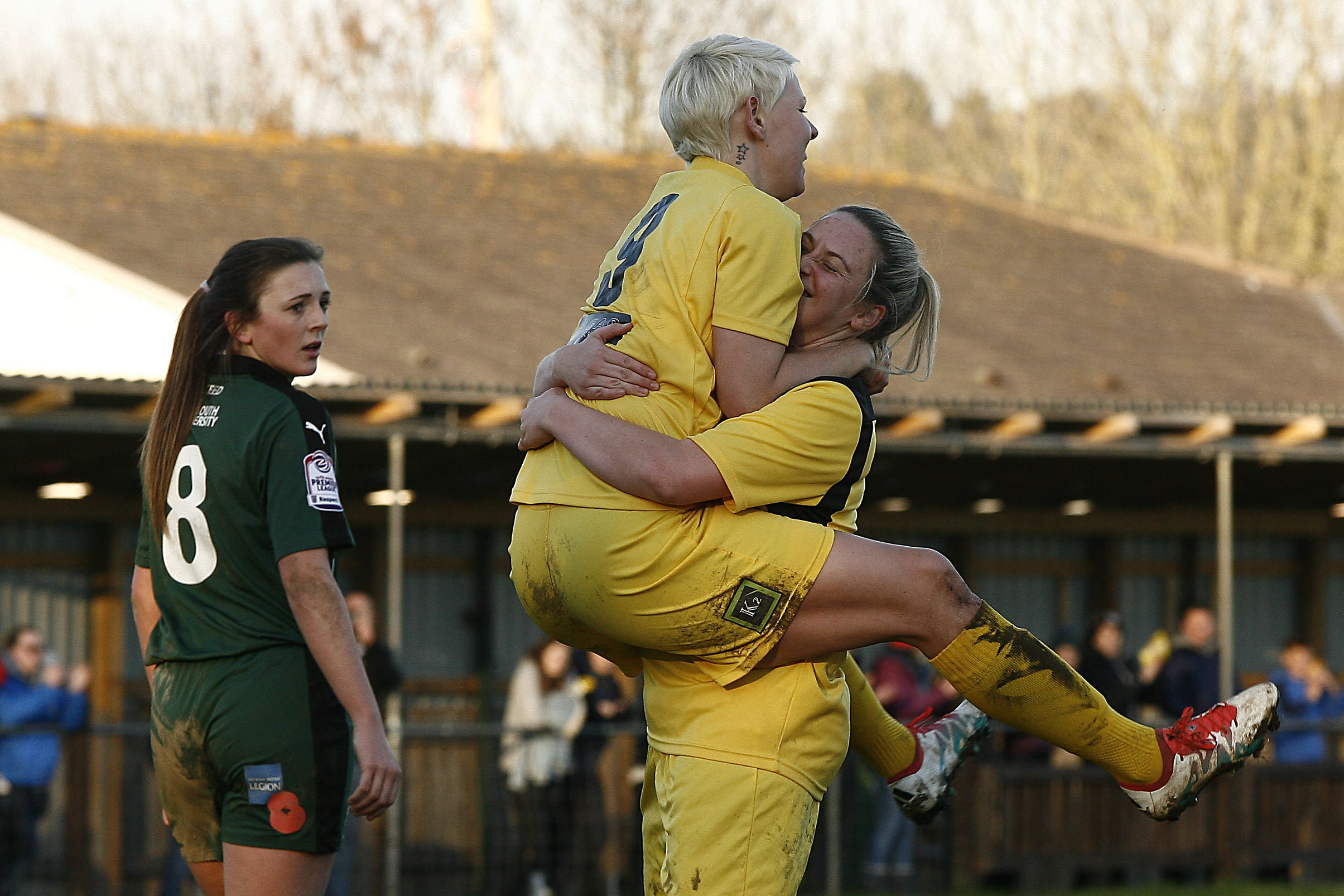 There were jubilant scenes at Homers Heath yesterday afternoon as Buckland Athletic Ladies defied the odds to send Devon Women’s Senior Cup holders Plymouth Argyle LFC crashing out of the competition with a deserved 4-2 victory in the semi-final.

Both sides started positively with Buckland’s Abi Bond confidently commanding her area in the early seconds and her opposite number, Michaela Phillips, doing likewise, scurrying out to whip the ball away from an onrushing Laura Gough. At the other end, Katie Hine intercepted well after Argyle probed up the left-hand side – and this was all within the first two minutes! More early drama was to come as Bucks won a free-kick for a foul on Kirsty Caunter and the ball ended up hitting the Argyle crossbar. Then it was straight up the other end again, Natasha Knapman’s drive saved well by Bond who then reacted to catch Ezme Wells’ follow-up. Three minutes later, Gough created Buckland’s first real chance, sending in a low drive which Phillips did well to smother.

Argyle had another good chance to take the lead on 15 minutes, Knapman again testing Bond with a low shot but the home custodian was equal to it and also punched away Kayley Lane’s follow-up effort. Then it was Buckland’s turn to push for goal, Argyle defending stoutly and with great intelligence as they stood up to some tenacious attacking play, cut off the supply lines from the back and generally threw their bodies on the line. With the sun in her eyes for most of the first half, Phillips will have been relieved to see Helen Kukor’s looping effort, from a Carla Staddon free-kick, drop wide.

Hearts were in mouths on 28 minutes when a green body went down in the box but the referee’s whistle signified a free-kick to the home side. Soon after, Gough broke down the right and crossed to Helen Kukor who, with the goal gaping, blasted the ball inches wide of the right-hand upright. Shortly after that chance, Plymouth were caught offside just as the visiting forward was preparing to test Bond again. Then, on 39 minutes, came the opener. After a period of pressure, Kayleigh Brown sent in a corner, Katie Middleton flicked it on with her head and Lane reacted quickest to stab home the loose ball and put Argyle ahead. However, there was no sign of despondency in the home side and, on 44 minutes, Buckland found a deserved equaliser, captain Maria Warman working her way into the box before laying the ball to Kukor who made no mistake.

Argyle nearly got their noses in front within a minute of the restart which again started in a positive fashion from both sides. Wells sent in a dangerous cross which Knapman smashed into the crossbar before Buckland managed to clear, leaving the visiting fans aghast. At the other end, Kukor hit her effort narrowly wide and Gough was also wide with a curled effort before Phillips did well to beat away another Kukor shot as Buckland broke with intent. With Kukor off the field following a knock, Plymouth seemed to take the opportunity to pile on more pressure, Knapman finding herself in a good position but unable to bring Wells’ cross under control.

Then came the move that was to see Buckland take the lead for the first time in the game. An incisive passing move on the edge of the box put the home side through and Becky Atkins brought down Caunter. Deemed to be the last player, Atkins received her marching orders and Hayley Chamberlain was given the responsibility from 12 yards. The midfielder made no mistake, hitting her spot-kick confidently into the bottom left after 62 minutes.

Both sides then adjusted their attacking options with Gabi Alphous coming on for Plymouth and Abigail Meyer entering the field of play for the hosts. Then, on the 75th minute, Buckland booked their place in the final with two goals within an amazing minute for the home side. As Plymouth pushed for an equaliser, Bond collected the ball and began another attack which saw Gough surging through on the right-hand side. On reaching the edge of the box, and without breaking stride, Bucks’ top scorer hit a sublime flighted shot over Phillips and into the far corner. Barely had the game restarted when Bucks turned over possession again and the ball found Caunter who produced a carbon copy goal to send the home crowd wild. 4-1 up with 15 minutes remaining and a player advantage, the odds were stacked in Buckland’s favour now but the holders, who play their football two division’s higher, could not be underestimated. Knapman, who deserved a goal for her efforts, tested Bond a few more times before the end but when Argyle’s second did come it was the substitute, Alphous, who found the net with a low shot on 85 minutes. Gough and Meyer eased the pressure, the latter tenaciously fighting her way into the box before being thwarted by Phillips, while, at the other end, Argyle were awarded a free-kick right on the edge of the box, right on the 90th minute, the wall doing its job. Plymouth were still desperately trying to claw another one back, hoisting another free-kick into the box three minutes into stoppage time, when the referee finally called time and the home celebrations could begin in earnest.

“I’m over the moon for them,” said manager Grant Fisher after the game. “They have great ability, they believe in themselves and I said to them before the game I wouldn’t swap any of them for Plymouth.

“To beat a side two leagues above you 4-2 is an absolute testament to what they do and how hard they work – and after going one-nil down as well it was an outstanding reaction.

“People forget we knocked out Exeter in the last round, so we’ve knocked out the two highest-ranked teams in the competition.

“Long may it continue, this great journey we’re on.”

As far as this year’s journey in the Senior Cup goes, there is only one more step to take – an April 7th final against Marine Academy Plymouth Ladies who enjoyed a 6-1 victory over Plympton Ladies in yesterday’s other semi-final.