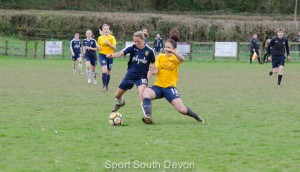 Going into this South West Women’s Premier League fixture, the two teams occupied first and second positions in the league and there was little to separate the two sides for most of the game, with pitch conditions being very heavy after the recent bad weather.

Torquay started very brightly and had a chance inside the first couple of minutes when a fine cross from the left wing found its way across the box, but the United forward could not find the finish to go with the excellent ball in.

Buckland slowly started to dominate the first period and it wasn’t long before the opening goal arrived in the 24th minute. Amber Coates fired the ball in from 12 yards after United failed to fully clear an in swinging corner from the right and the ball fell nicely to Coates who finished well.

Eight minutes later and the league leaders where two up. A long ball from the back found Coates on the right and the Buckland player ran the ball into the area before striking her shot high into the net giving the Gulls keeper little chance of stopping the effort.

Neither side made any changes at half time and as the sun started to come out, Torquay looked to try and get back into the game quickly with Sarah Smith firing her shot over the bar from a tight angle. Smith then made the Buckland keeper work on the hour when a good strike was parried away before being cleared by the defence.

United edged a very impressive second half but there was always the feeling that Buckland could get that decisive  goal with their greater attacking threat and only a well timed challenge in the area on 76 minutes stopped the visitors from making it three.

Both managers and players can be happy with their teams performance this afternoon, in what was a lively, entertaining derby day encounter.

Buckland now move onto 42 points after 14 games with 8 games remaining in the season. While Torquay slip to 3rd after this defeat having played 16 games. Marine Academy Plymouth Ladies move into 2nd in the table, after a 3-0 win against Bishops Lydeard Ladies. Marine are 6 points behind Buckland with a game in hand.